The graph shows the information about the UK birth rates for women from 1973 to 2008. 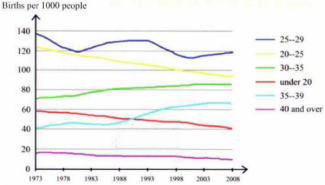 From an overall perspective, it is evident that the rate of births given by women aged from 30 to 39 showed an upward trend, whereas a reverse pattern could be observed in the others over the year shown

Essay Categories
IELTS Writing Task I - IELTS Academic
This essay topic by users:
END_OF_DOCUMENT_TOKEN_TO_BE_REPLACED
Essays by the user:
Write an essay by this topic

Transition Words or Phrases used:
first, however, if, whereas, while, in contrast