Questions 1-11 are based on the following
passage.

any part of the body. For imaging purposes the hydrogen
nucleus (a single proton) is used because of its abundance in
5 water and fat.
The hydrogen proton can be likened to the planet earth,

spinning on its axis, with a north-south pole. In this respect it

circumstances, these hydrogen proton “bar magnets” spin in
10 the body with their axes randomly aligned. When the body is

placed in a strong magnetic field, such as an MRI scanner,

the protons' axes all line up. This uniform alignment creates a

magnetic vector oriented along the axis of the MRI scanner. MRI scanners

come in different field strengths, usually
15 between 0.5 and 1.5 tesla.
The strength of the magnetic field can be altered

electronically from head to toe using a series of gradient

electric coils, and, by altering the local magnetic field by

these small increments, different slices of the body will
20 resonate as different frequencies are applied.
When the radiofrequency source is switched off the

magnetic vector returns to its resting state, and this causes a

signal (also a radio wave) to be emitted. It is this signal

which is used to create the MR images. Receiver coils are
25 used around the body part in question to act as aerials to

improve the detection of the emitted signal. The intensity of

sectional images are built up.
Multiple transmitted radiofrequency pulses can be used in
30 sequence to emphasise particular tissues or abnormalities. A

different rates when the transmitted radiofrequency pulse is

switched off. The time taken for the protons to fully relax is

measured in two ways. The first is the time taken for the
35 magnetic vector to return to its resting state and the second is

the time needed for the axial spin to return to its resting state.

relaxation.
An MR examination is thus made up of a series of pulse
40 sequences. Different tissues (such as fat and water) have

different relaxation times and can be identified separately. By

using a “fat suppression” pulse sequence, for example, the

signal from fat will be removed, leaving only the signal from

any abnormalities lying within it.
45 Most diseases manifest themselves by an increase in water

content, so MRI is a sensitive test for the detection of

disease. The exact nature of the pathology can be more

difficult to ascertain: for example, infection and tumour can

in some cases look similar. A careful analysis of the images
50 by a radiologist will often yield the correct answer.
There are no known biological hazards of MRI because,

in the radiofrequency range which is found all around us and

does not damage tissue as it passes through. 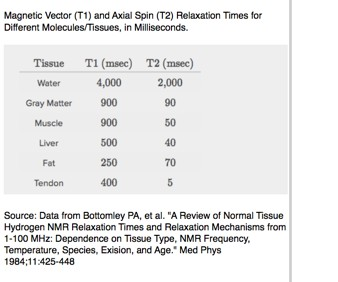