Questions 22-31 are based on the following
passage.


This passage is adapted from Bryan Walsh, “Whole Food Blues: Why Organic Agriculture May Not Be So Sustainable.” ©2012 by Time Inc.


When it comes to energy, everyone loves

efficiency. Cutting energy waste is one of those goals

that both sides of the political divide can agree on,
even if they sometimes diverge on how best to get
5 there. Energy efficiency allows us to get more out of

our given resources, which is good for the economy

and (mostly) good for the environment as well. In

an increasingly hot and crowded world, the only

sustainable way to live is to get more out of less.
10 Every environmentalist would agree.
But change the conversation to food, and

incredibly efficient on a simple land to food basis.
15 Thanks to fertilizers, mechanization and irrigation,

each American farmer feeds over 155 people

worldwide. Conventional farming gets more and

over 170 bushels of corn per acre in Iowa, for
20 example—which can mean less territory needs to

be converted from wilderness to farmland.

good for the environment.
Of course, that’s not how most environmentalists

regard their arugula [a leafy green].They have

embraced organic food as better for the planet—and
30 healthier and tastier, too—than the stuff produced by

the enormous amounts of energy needed and waste

created by conventional farming, while organic

billion—and people are making those purchases for

their consciences as much as their taste buds.
Yet a new meta-analysis in Nature does the math
40 and comes to a hard conclusion: organic farming

farming may not be as good for the planet as
45 we think.
In the Nature analysis, scientists from McGill

Minnesota performed an analysis of 66 studies

comparing conventional and organic methods across
50 34 different crop species, from fruits to grains to

a lower yield for every crop type, though the disparity

beans or perennial crops like fruit trees, organic
55 trailed conventional agriculture by just 5%. Yet for

major cereal crops like corn or wheat, as well as most

vegetables—all of which provide the bulk of the

outperformed organics by more than 25%.
60 The main difference is nitrogen, the chemical key

of 171 million metric tons of synthetic fertilizer each

year, and all that nitrogen enables much faster plant

growth than the slower release of nitrogen from the
65 compost or cover crops used in organic farming.

When we talk about a Green Revolution, we really

mean a nitrogen revolution—along with a lot

of water.
But not all the nitrogen used in conventional
70 fertilizer ends up in crops—much of it ends up

running off the soil and into the oceans, creating vast

nitrogen into the soil than the planet can stand over

the long term. And conventional agriculture also
75 depends heavily on chemical pesticides, which can

have unintended side effects.
What that means is that while conventional

agriculture is more efficient—sometimes much more

efficient—than organic farming, there are trade-offs
80 with each. So an ideal global agriculture system, in

the views of the study’s authors, may borrow the best

from both systems, as Jonathan Foley of the

vegetable farms, where growing nutrition (not

just bulk calories) is the primary goal. But for

crops of wheat, rice, maize, soybeans and so on,
90 conventional farms have the advantage right

now.
Looking forward, I think we will need to deploy 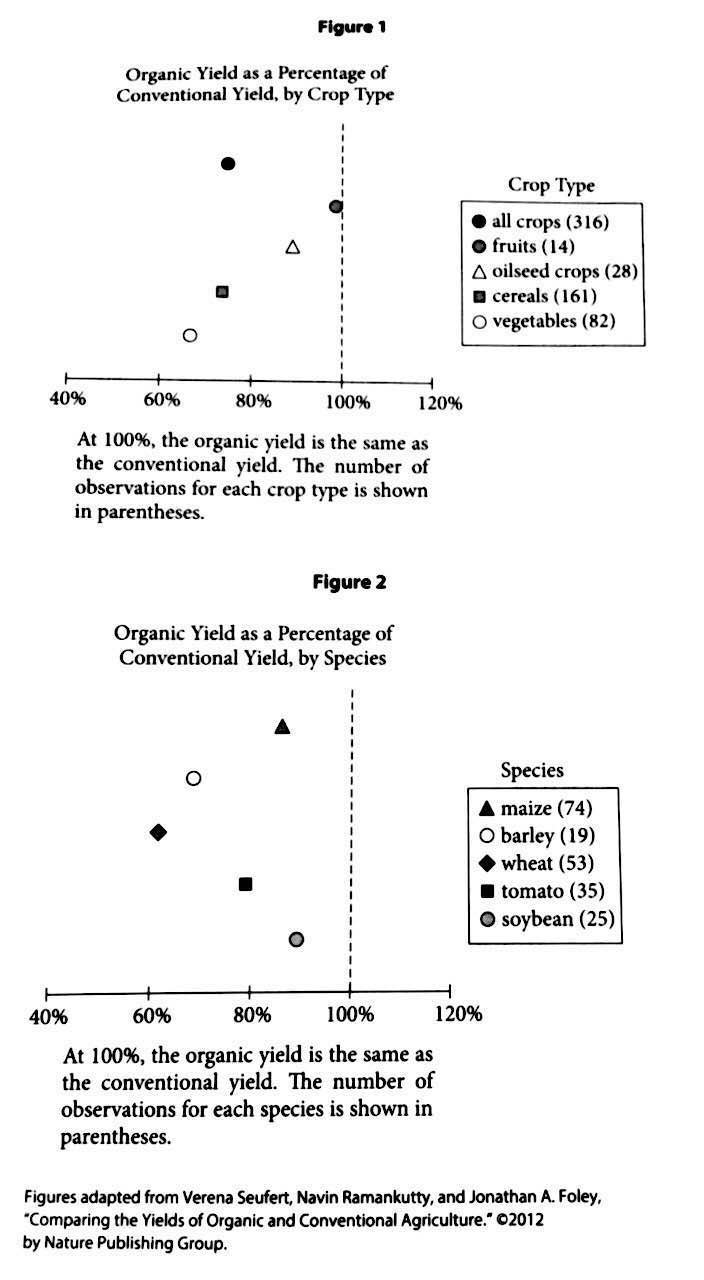