Questions 43-52 are based on the following
passage.


This passage is adapted from Kevin Bullis, “What Tech Is Next for the Solar Industry?” ©2013 by MIT Technology Review.

but the solar panel manufacturing industry is in the

doldrums because supply far exceeds demand. The
poor_ market may be slowing innovation, but
5 advances continue; judging by the mood this week at

the IEEE Photovoltaics Specialists Conference in

optimistic about its long-term prospects.
The technology that’s surprised almost everyone
10 is conventional crystalline silicon. _A few years ago,

Martin Green, professor at the University of

New South Wales and one of the leading silicon solar

panel researchers, declared that they’d never go
15 below $1 a watt._ “Now it’s down to something like

50 cents a watt, and there’s talk of hitting 36 cents per

watt,” he says.
The U.S. Department of Energy has set a goal of

reaching less than $1 a watt—not just for the solar
20 panels, but for complete, installed systems—by 2020.

Green thinks the solar industry will hit that target

even sooner than that. _If so, that would bring the

direct cost of solar power to six cents per

kilowatt-hour, which is cheaper than the average cost
25 expected for power from new natural gas power

plants.
All parts of the silicon solar panel industry have

been looking for ways to cut costs and improve the

power output of solar panels, and that’s led to steady
30 cost reductions._ Green points to something as

mundane as the pastes used to screen-print some of

the features on solar panels. Green’s lab built a solar

cell in the 1990s that set a record efficiency for silicon

solar cells—a record that stands to this day. To
35 achieve that record, he had to use expensive

collecting current from the solar cell. But gradual

improvements have made it possible to use screen

lines as thin as 30 micrometers—about the width of

the lines Green used for his record solar cells, but at

costs far lower than his lithography techniques.
Meanwhile, researchers at the National Renewable
45 Energy Laboratory have made flexible solar cells on a

which is thin and can be rolled up. The type of solar

cell they made is the only current challenger to

cheaper.
One of Green’s former students and colleagues,

Jianhua Zhao, cofounder of solar panel manufacturer
55 China Sunergy, announced this week that he is

building a pilot manufacturing line for a two-sided

solar cell that can absorb light from both the front

and back. _The basic idea, which isn’t new, is that

during some parts of the day, sunlight falls on the
60 land between rows of solar panels in a solar power

plant.That light reflects onto the back of the panels

and could be harvested to increase the power output.

This works particularly well when the solar panels

are built on sand, which is highly reflective.Where a
65 one-sided solar panel might generate 340 watts, a

expects the panels to generate 10 to 20 percent more

electricity over the course of a year.
Even longer-term, Green is _betting on_ silicon,
70 aiming to take advantage of the huge reductions in

cost already seen with the technology. He hopes to

by combining silicon with one or two other

semiconductors, each selected to efficiently convert a
75 part of the solar spectrum that silicon doesn’t convert

efficiently. Adding one semiconductor could boost

efficiencies from the 20 to 25 percent range to

around 40 percent. Adding another could make

efficiencies as high as 50 percent feasible, which
80 would cut in half the number of solar panels needed

for a given installation. The challenge is to produce

good connections between these semiconductors,

something made challenging by the arrangement of 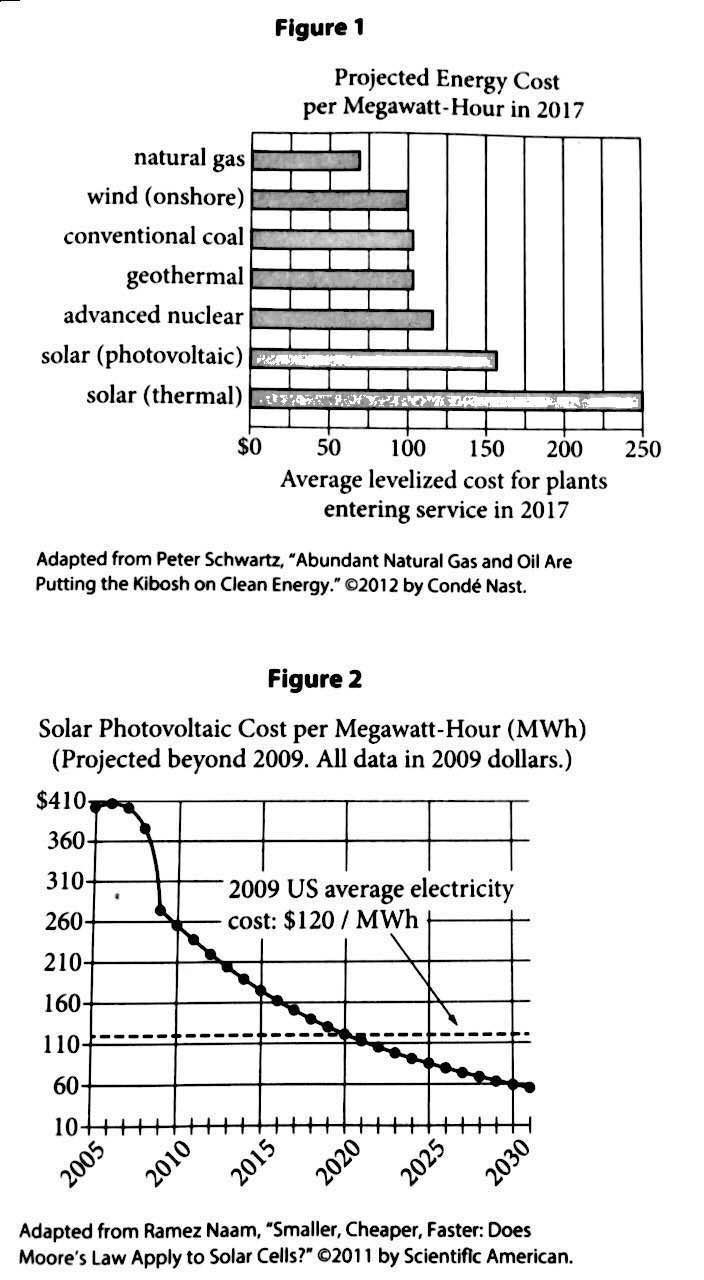