Questions 23-33 are based on the following
passage.


Marketed as SmartFresh, the chemical 1-MCP (1-methylcyclopropene) has been used by fruit growers since 2002 in the United States and elsewhere to preserve the crispness and lengthen the storage life of apples and other fruit, which often must travel long distances before being eaten by consumers. Q23 1-MCP lengthens storage life by three to four times when applied to apples. This extended life allows producers to sell their apples in the off-season, months after the apples have been harvested. And at a cost of about one cent per pound of apples, 1-MCP is a highly cost-effective treatment. However, 1-MCP is not a panacea for fruit producers or sellers: there are problems and limitations associated with its use.

[1] 1-MCP works by limiting a fruit’s production of ethylene, Q24 it is a chemical that causes fruit to ripen and eventually rot. [2] While 1-MCP keeps apples Q25 tight and crisp for months, it also limits Q26 their scent production. [3] This may not be much of a problem with certain kinds of apples that are not naturally very fragrant, such as Granny Smith, but for apples that are prized for their fruity fragrance, such as McIntosh, this can be a problem with consumers, Q27 that will reject apples lacking the expected aroma. [4] But some fruits do not respond as well to 1-MCP as others Q28 did, and some even respond adversely. [5] Furthermore, some fruits, particularly those that naturally produce a large amount of ethylene, do not respond as well to 1-MCP treatment. [6] Take Bartlett Q29 pears, for instance, unless they are treated with exactly the right amount of 1-MCP at exactly the right time, they will remain hard and green until they rot, and consumers who experience this will be unlikely to purchase them again. Q30

Finally, researchers have found that 1-MCP actually increases susceptibility to some pathologies in certain apple varieties. For example, Empire apples are prone to a condition that causes the flesh of the apple to turn brown. Traditionally, apple producers have dealt with this problem by leaving the apples in the open air for three weeks before storing them in a controlled atmosphere with tightly regulated temperature, humidity, and carbon dioxide levels. As the graph shows, the flesh of untreated Empire apples that are first stored in the open air undergoes Q31 roughly five percent less browning than the flesh of untreated Empire apples that are immediately put into storage in a controlled environment. However, when Empire apples are treated with 1-MCP, Q32 their flesh turns brown when the apples are first stored in the open air, though not under other conditions. Although researchers continue to search for the right combination of factors that will keep fruits fresh and attractive, Q33 the problem may be that consumers are overly concerned with superficial qualities rather than the actual freshness of the fruit. 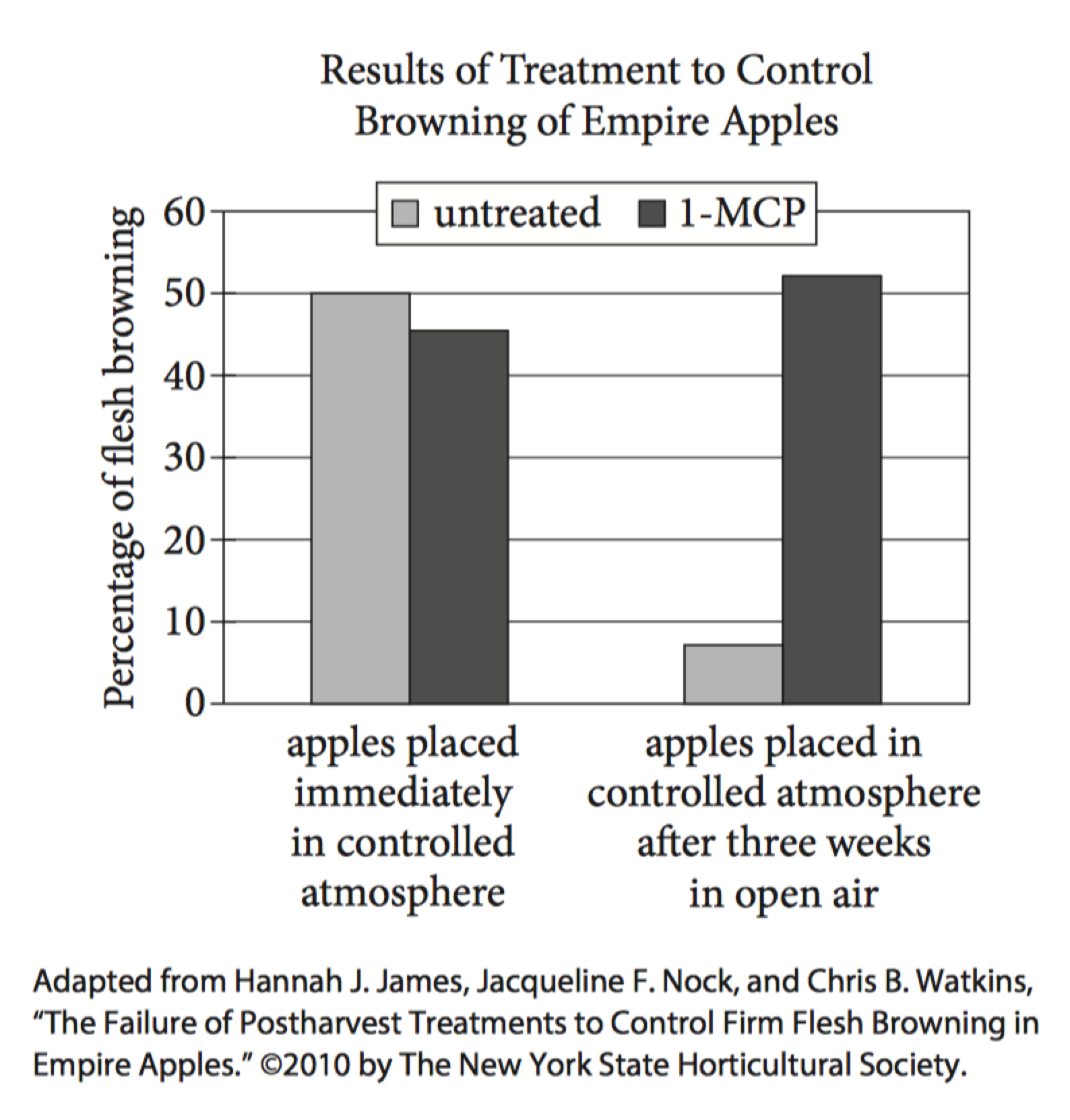