Write a report for a university lecturer describing the information below.
https://drive.google.com/file/d/17-t-p6s5s46S8dOZLf9oRCx1mpNd7IhA/view?… 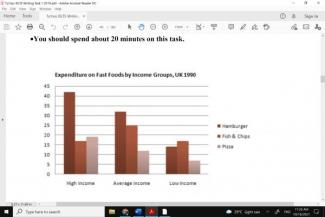 The bar chart depicts statistics on fast foods expenditure of 3 different groups of income in 1990.

Overall, hamburger, fish and chips, pizza are spent differently among the 3 groups of people living in the UK. The high income group has the biggest amount of money spent on fast foods, and the low income group, in contrast, has the smallest amount.

Hamburger was the most preferred fast food among the high and average income people, with around 42% and 32% people spending on it, respectively. Slightly more than 15% people with high income spent on fish and chips, a little less than the number of people from this group charging for pizza, which was about 18%. By contrast, the percentage of expenditure on fish and chips outweighted that of money spent on pizza, which was exactly 25% and slightly more than 10%, respectively.

Having much moderate number than those 2 groups above, the low income people spent their money on fish and chips with the highest amount, which was around 22%. Unlikely the high and average income groups, the figure for hamburger only ranked as the second-highest among this group, which was almost 15%. Pizza was the least preferred fast food, with only more than 5% people with low income chage for it.

Essay Categories
IELTS Writing Task I - IELTS Academic
This essay topic by users:
END_OF_DOCUMENT_TOKEN_TO_BE_REPLACED
Essays by the user:
Write an essay by this topic

Transition Words or Phrases used:
if, second, in contrast