The bar chart below shows the percentage participation of men in senior development in three companies between 1980 and the year 2010. Summary the information by selecting and report in the main features, and make comparisons where relevant.
Write at least 150 words (the graph is attached below) 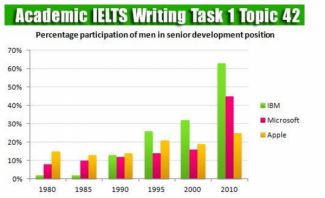 The bar diagram demonstrates the proportion of men that participated in the senior development area in three different technology companies over a period of 30 years, starting from 1980.
Generally, it is immediately obvious that the participation of men in 2010 took the highest percentage compared to the other years in three companies.
Over the course of 30 years, IBM company witnessed a considerable increase to over 60 percent at the end of the period while its beginning percentage was extremely low, which was less than 5 percent. Particularly, its proportion in 2010 was nearly double to the data in the last 10 years. Regarding Microsoft company, its percentage remained relatively the same, at 10 percent on average, from 1980 to 2000 while shooting up to over 40 percent in 2010. The Apple corporation, on the other hand, had the highest proportion among the three companies in 1980, it gradually increased by 10 percent over three decades.

Essay Categories
IELTS Writing Task I - IELTS Academic
This essay topic by users:
END_OF_DOCUMENT_TOKEN_TO_BE_REPLACED
Essays by the user:
Write an essay by this topic