The map below shows the development of the village of Ryemouth between 1995 and present. 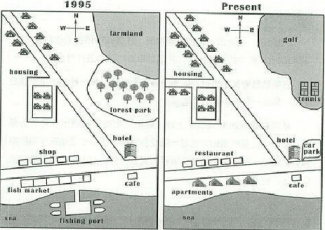 The maps above show us clearly the planned change in the village of Ryemouth from 1995 to present.

In 1995, there was a large farmland located in the northeast, to the south of which there was a forest park. To the west of the forest, beside the road crossing northwest to the southeast, there was the only residential area. In the south along the seaside, there was a shop and a fish market, which were isolated by another road cross the west to the east. Where the two roads crossed, there located a hotel. In addition, there was also a fishing port at the offshore area in the south.

The village has obviously witnessed great change in the following years, for that at present, the layout is totally different. In the northeastern part, where there once to be a farmland and a forest parks, there is a golf court and a tennis court. Furthermore, a new road has been build near the residential area and there certainly appears to be more housings. The shop has be replaced by a restaurant and the fish market has be changed to apartments. It is also notable that the fishing port is gone and a new parking lot has been constructed beside the hotel. The only thing remains unchanged was the cafe opposite to the hotel.

In conclusion, the village of Ryemouth has experience a great change and the whole area seems to emphasize tourist industry rather than agriculture.

Essay Categories
IELTS Writing Task I - IELTS Academic
This essay topic by users:
END_OF_DOCUMENT_TOKEN_TO_BE_REPLACED
Essays by the user:
Write an essay by this topic