The chart below show the expenditure of two countries on consumer goods in 2010. 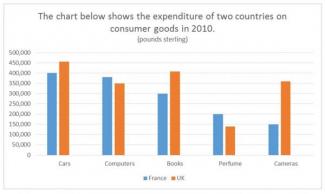 The given bar chart depicts data on the amount of money the French and the British spent on five consumer goods, namely cars, computers, books, perfume and cameras in 2010. Units are measured in pounds sterling.

Overall, it is clear that both France and the UK expended the greatest amount of money on cars. Moreover, perfume was the least preferred good by the British consumers, whereas the French spent the least money on cameras.

*** The full content of this essay is available to VIP readers

Essay Categories
IELTS Writing Task I - IELTS Academic
This essay topic by users:
END_OF_DOCUMENT_TOKEN_TO_BE_REPLACED
Essays by the user:
Write an essay by this topic