The graph below shows in percentage terms the changing patterns of domestic access to modern technology in homes in the UK. 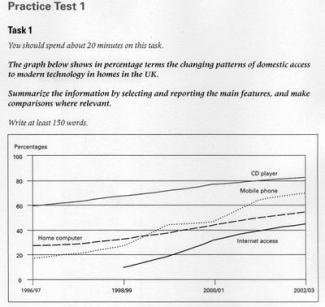 The line graph provides information about the proportion of private use of CD player, mobile phone, home computer and Internet access between 1996 and 2003 in the UK.
Overall, both four kinds of domestic access experienced a significant rise in comparison with the beginning. At the end of the period, CD player and mobile phone were the most common.
In 1996/1997, CD player dominated with 60% of using, followed by home computer (nearly 30%) and mobile phone (under 20%). Meanwhile, the Internet only starting in 1998/1999 showed the lowest figure with the percentage of about 10%.
At the end of the period, CD player stayed most popular, going from 60% to over 80%. Unsurprisingly, mobile phone had the most noticeable upward, from under 20% to around 70% although it had levelled off during the last year of 20th century. The percentage of the UK people using home computer also increased by almost 30%. Despite the late start, Internet access grew by more than 30%, from about 10% to over 40%.

Essay Categories
IELTS Writing Task I - IELTS Academic
This essay topic by users:
END_OF_DOCUMENT_TOKEN_TO_BE_REPLACED
Essays by the user:
Write an essay by this topic

Transition Words or Phrases used:
also, if, so, while