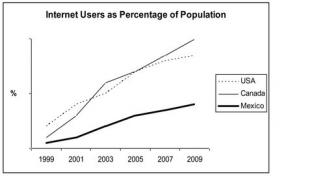 The line graph illustrates the number of people who uses the internet of the population in the period of ten years from 1999 to 2000 in three nations: USA, Canada and Mexcico.
In general, all three countries experienced a significant growth, while the USA ranked first, Mexico was the lowest in Internet users.
In 1999, the percentage of the internet users of USA was at about 20%, followed by Canada at 10% and finally was Mexico at about 5%.In 2003, USA and Canada rose substantially to more than/around 50% while Mexico gradually increased to 30%.
In 2005, Internet usage in both the USA and Canada rose to around 70% of the population, while the figure for Mexico reached just over 25%.In 2009, the growth of users in USA and Canada was dramatic, reaching 100% and 80% respectively. Mexico was the lowest one which reached 40%.

Essay Categories
IELTS Writing Task I - IELTS Academic
This essay topic by users:
END_OF_DOCUMENT_TOKEN_TO_BE_REPLACED
Essays by the user:
Write an essay by this topic