The Chart below show the males and females arrested over 5 years and the reasons for the most recent arrests. 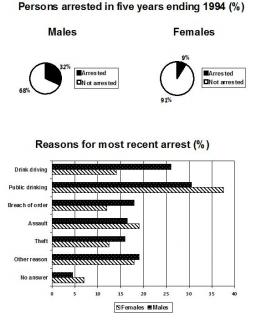 The pie chart illustrate the proportion of the genders arrested and not arrested over 5 years, while the bar chart gives information about the reasons of boys and girls got arrested between 1989 and 1994.

As it can be seen that, Public drinking was the main reason for both males and females were arrested, with about 31% and 37% respectively. In term of Drink driving, males had over 25% as opposed to below 15% for females. Furthermore, Assault for girls were about 19% than boys, while Theft for boys were about 16%.

On the other hand, Other reason that genders(Males and females) got arrested had slightly different with about 18% and 17% respectively. No answer for both gender was the lowest percentage of reason for most recent arrest with less than 5% for boys and about 7% for girls.

Essay Categories
IELTS Writing Task I - IELTS Academic
This essay topic by users:
END_OF_DOCUMENT_TOKEN_TO_BE_REPLACED
Essays by the user:
Write an essay by this topic

Sentence: Overall, both genders percentage of arrested and not arrested had a huge different in the given period.
Description: A noun, plural, common is not usually followed by a noun, singular, common
Suggestion: Refer to genders and percentage