the pie charts and table gives information about the total value and sources of fish imported to the US between 1988 and 2000. 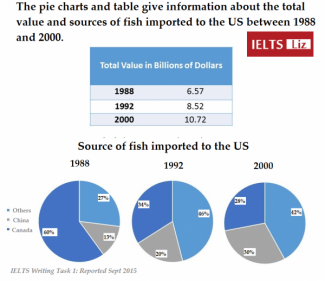 The pie chart shows the information about the countries (Canada, China and others) from where fish is imported to the US while, the table illustrates the total value of imported fish from the year 1988 to 2000. Units are measured in billions of dollars.

Overall, the value of imports rose by a double over the span of years. At the same time, Canada is the most prominent supplier of imported fish started to decline and other countries became the main source.

Regarding the table, the total value of important fish was $6.57 billion in the year 1988. These figures started to change over the course of the year with the value soaring to $10.72 billion in 2000.

Essay Categories
IELTS Writing Task I - IELTS Academic
This essay topic by users:
END_OF_DOCUMENT_TOKEN_TO_BE_REPLACED
Essays by the user:
Write an essay by this topic

Transition Words or Phrases used:
but, regarding, so, while

The tariff system (import tax) of the United States is built on the basis of the tariff system (hereinafter referred to as HS) of the Customs Cooperation Council, an intergovernmental organization based in Brussels. US import duties are subject to change and are announced annually run 3

I wanna know more about this…

I wanna know more about this because this is really informative! octordle